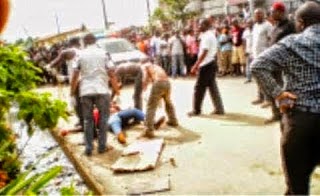 According To Metro News, When Miss Rita Anwuli Onelum, a 300 level Economics student of the Lagos State University (LASU), left home last Tuesday, probably for school, she had no inkling of what cruel fate had in stock for her. For three days, her friends, colleagues and family members searched for her to no avail. On the third day, Thursday, they received urgent calls to come and see her. But it was shock that awaited them.They were not alone that Thursday morning. The residents and business owners at Odo Olowu Street, Ijeshatedo, on the Apapa – Oshodi Expressway, Lagos, woke up to a horrendous sight. The body of a lady, later identified to be that of Anwuli was lying near a popular church in the area. People, terrified by the sight of the body, gathered in clusters, wondering what was responsible for her death. A team of policemen, which had responded to the call by members of the Neighbourhood Watch, had a hectic time dispersing passers-by from taking snap shots of the body. The people claimed not to have any clue on what happened.The policemen from the Ijeshatedo Police Station also declined comment on the incident. But a member of the Neighbourhood Watch, Mr Badmus Azeez Adeniyi, said a lady informed him about the incident.He said: “I was alerted by one of my younger sisters who was going out very early this morning (Thursday) to buy goods from Seme. “She rushed to call me, panting heavily, trying to inform me that there is somebody that is lying on the road near Odo Olowu bus stop on Apapa – Oshodi Expressway. “We rushed down to the scene and found out this lifeless body lying over there. Immediately we alerted the police and they came.“There is no clue yet on what could have happened to the lady. But it is like a case of murder that took place somewhere. Apparently, the perpetrators had waited for the cover of the dark to drop her corpse here. “Nobody can say exactly when they did this but it surely cannot be anything around 10pm and 11pm last night because we still passed through this area when we were on surveillance watch last night.”However, it was learnt that the lady’s bag which was found by her side had some personal effects and the GSM phone which was used to reach out to some people who disclosed her identity, and promised to come to the scene immediately. Soon, some of those earlier contacted through her phone started arriving at the venue. The first of them to arrive is a young man who identified himself as Ogugua Godwin Anabor.By the time Anabor moved closer to where the body was lying, he lost his composure and broke down in tears. The man, who claimed they are from Illah, Delta State, identified the body as that of Rita Onwuli, a 300 level Economics student of LASU. He said: “It was quite a while when we saw her. I visited her the last time we saw at her residence at No 44, Adigun Street, in Idi-Araba, Mushin.” When contacted, the LASU Public Relations Officer, Mr Sutton Kayode, said he was going to check if Anwuli was a student of the institution. But at press time, he was yet to confirm.Another relative, who identified himself as Ogbuenyi Paul Onyelum, was too distraught to respond to enquiries. Yet another relative, who was weeping inconsolably and refused to identify himself, disclosed that they had been looking for the lady for three days. He said: “We have been looking for her since three days ago. We were surprised to receive the call this morning that Rita has been found but was involved in an accident. They said we should come to Ijesha Police Station. On getting here, what we are seeing is just unbelievable.” When the state Police Public Relations Officer, Ngozi Braide, was contacted to confirm the story, she said she would call back. But she did not call at press time.