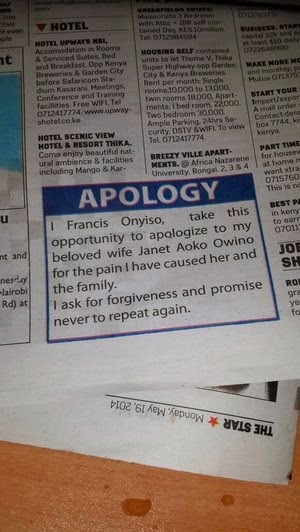 Yesterday we saw a dad disown his son on a national newspaper, what do you think of this one, guys? According to this Kenyan blog, former Harambee Stars player, Francis Onyiso, was allegedly caught pants down, cheating on his wife at a local hotel. It is reported that he was caught in the act after his wife followed him and his one night stand to the hotel on what was supposed to be a night out with his work mates. To make things right, he publicly apologised to his wife on a newspaper! The advert reportedly cost him 2000 Kenyan shillings = $22 = N3500!

Do you think that’s cool?