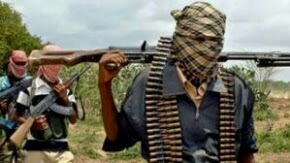 Similarly, two men were waylaid and killed by some armed men, believed to be political thugs, near Ushongo, Ushongo LGA of the state.

The Police Commissioner Hyacinth Dagala confirmed both incidents, saying his men had already swung into action to unravel the circumstances surrounding the killings.

The name of one of the policemen was given as Corporal Simon Tyokosu but the second victim’s name could not be ascertained as of the time of filling this report.
The PUNCH gathered that the policemen were shot on duty while on a stop and search operations near the Federal Government College, Vandeikya.

It was further gathered that the policemen had stopped the vehicle to conduct a search, only for the occupants of the car to open fire on them.
A source told our correspondent that one of the policemen died instantly while the second died at an undisclosed hospital in the town.

Meanwhile, the other two people were killed along the Katsina-Ala-Adikpo Road.
An eyewitness, identified simply as Sandra, said three men were in a vehicle heading towards Adikpo when another car intercepted them, dragged them out and shot at them, killing two on the spot.
One of them, however, narrowly escaped death even though he was shot in the arm and the chest.