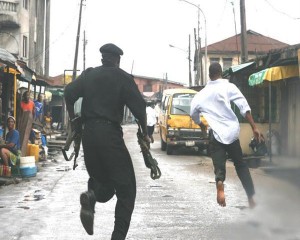 While addressing newsmen, the CP said the alleged criminals were arrested in an uncompleted building at Owode area of the state, where according to him, information had been rife that criminals were usually gathering at the place. The Commissioner said that one of the suspects, Odetunde Jacob, who allegedly confessed to the crime told the police that they had killed someone (name withheld) at Ogbomoso area of the state.
“The suspects who all disguised as prophets have confessed to the crime,” the CP said. Four men were also paraded for alleged involvement in fraudulent act. The CP said the suspects claimed that they were major distributors of Cadbury products in Ibadan, but that they duped the complainant, Mrs Funke Lawal, of a sum of N1.2 million.‎