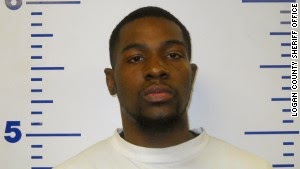 A30-year old man from Oklahoma Alton Nolen, shortly after he learnt he would lose his job launched an attack and beheaded a 54 year old colleague Colleen Hufford in the city of Moore.
He allegedly stabbed another colleague immediately after beheading the first over an office dispute at a Vaughan Foods processing plant not far from Oklahoma City, CNNreports
Police sources revealed that Nolen walked into the building’s front office and attacked Colleen Hufford, 54, with a knife, stabbing her several times before beheading her.
After beheading Hufford, he then allegedly turned to Traci Johnson, 43, and began attacking her with the same knife.
According to Lewis, Mark Vaughan, an Oklahoma County reserve deputy and a former Chief Executive Officer of the business, stopped Nolen’s attack on the victim after he fired on him multiple times. He said that but for timely intervention, the situation would have gotten out of hand.
Johnson is said to have sustained serious injuries resulting from the stab and is currently receiving treatment at a hospital in the city whereas Hufford was confirmed dead.
However, it was learnt that Nolen had been confined until March 2013, for possession of a controlled substance, escaping confinement and resisting an officer. it was learnt that Nolen was recently converted to Islam and also, he has been dismissed from the office after committing the heinous act.
In a statement made by Police Sergeant Jeremy Lewis on Friday in a news conference, he said the suspect was angry about some sort of incident that transpired in the office and decided to take it out on innocent colleagues.
Police officials operating in the area where the monstrous act occurred has asked for assistance from the FBI because the ISIS insurgents are known for killing and beheading innocent residents of the city.