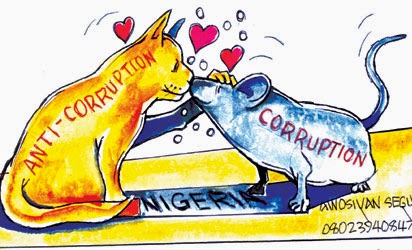 Enugu – The Speaker of the Enugu State House of Assembly, Eugene Odo, has urged civil servants to join the fight against corruption for the sustenance of the country’s democracy.Odo gave the advice at the pre-May Day 2014 lecture titled “100 Years of Nationhood: The Role of Trade Unions in Sustaining Democracy in Nigeria” and award presentation in Enugu on Monday.“One major role which trade unions need to play and which they have been shirking in responsibility is mobilising Nigerians to fight corruption.”“Today in Nigeria, corruption and stealing have assumed an endemic height and have pervaded all levels of public and private sectors reaching up to an unprecedented level in incidence and magnitude,” he said.He condemned politicians who offered money to be voted for and Nigerians who received such money to vote, adding that such people were sentencing Nigerians to untold hardship and mortgaged the future of the children.In his presentation, the Chairman of the Trade Union Congress, Chukwuma Igbokwe, said that unionism was not all about demand for workers’ rights, but partnering with the government at all levels for good governance and the overall development.“To all our awardees, we are here to prove that there is recognition for good service rendered and that your good works will always speak for you.”“We will also encourage you to continue your service to mankind at whichever area or position that you find yourselves.”“We use this opportunity to advice other public office holders and other establishments to be committed in their service to the people, particularly the masses,” he said.