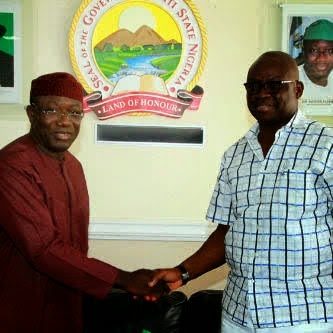 The APC has released a statement saying they are going to court to challenge the process of the recently concluded governorship election in Ekiti State, for what it termed the militarization of Ekiti during the campaign and election period. APC says the election was neither free nor fair. (Kayode Fayemi and Ayo Fayose pictured above after the election)
Rising from its National Working Committee meeting, the APC in a statement signed by its National Publicity Secretary, Lai Mohammed, said some of their members were harassed by military men before and during the election and this in no small measure affected the performance of their Party during the elections. Find the statement in part after the cut…
“In order to prevent a recurrence of what happened in Ekiti, especially the militarization of the process, the harassment and intimidation of citizens, especially those in opposition, my party has decided to challenge in court some of these constitutional breaches and will also encourage our leaders and supporters, who were arrested, harassed and intimidated to seek the enforcement of their fundamental rights that were recklessly abridged by the security agencies.”

“We believe that the events leading to the D-Day in Ekiti negate the principles of a free, fair and credible election. From the militarization of the election to the police attack on our supporters, arrest and detention of our leaders across the state and the use of huge funds to induce voters, the federal authorities skewed everything in favour of the PDP.  With thousands of armed troops, police, state security and civil defence personnel deployed to Ekiti, the state was simply under a total lockdown”