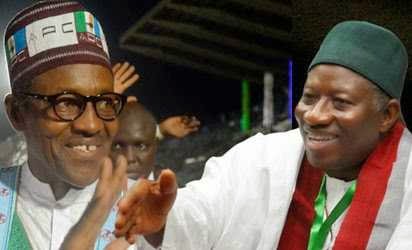 The battle is over at this point!! What a hard fight tho! President Jonathan congratulates General Buhari over his victory
According to Vanguard….
The president spoke with Muhammadu Buhari on the phone and will address the country after rounding off his meeting with his cabinet.
“Buhari was able to get more than 25 percent of votes in 24 states, which means there won’t be a run-off vote,” she said.
To win the election, Buhari had needed to win more than 50 percent of the total votes nationally – and take at least 25 percent of the vote in two thirds of the states.
According to the Reuters news agency, Buhari’s APC won by 2.1 million votes, with 15.4 million votes versus 13.3 for Jonathan and the PDP.
TheAll Progressives Congress (APC) party said their candidate received a phone call from incumbent President Goodluck Jonathan where he immediately conceded defeat and congratulated Buhari on his victory.
“President Jonathan called General Muhammadu Buhari, the winner of the elections, to congratulate him,” Lai Mohammed, the spokesman for the APC said.
“There had always been this fear that he might not want to concede, but he will remain a hero for this move. The tension will go down dramatically,
“Anyone who tries to foment trouble on the account that they have lost the election will be doing so purely on his own,” he added.
Victory for Buhari, a former military ruler, marks the first time in Nigeria’s history that an opposition party has democratically taken control of the country from the ruling party.
Big Congrats to GMB!!!