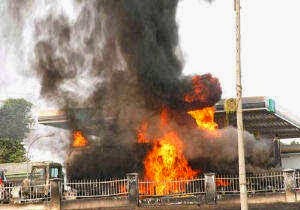 An explosion has occurred in a bus station in Bauchi State and is believed to be the work of terrorist sect, Boko Haram. The bomb went off in the Azare area of the state at about 9:45pm on Wednesday, October 22, AFP reports. According to a resident, Musa Babale: “We had a huge blast at exactly 9:45pm (20:45 GMT). We realised it had come from the bus station.” “The whole place was a mess.” This is the latest in a string of attacks » that have cast doubt on the authenticity of the recently announced ceasefire » between the Nigerian government and Boko Haram. Unconfirmed reports say 5 people were killed in the incident while an unspecified number suffered varying degrees of injury.