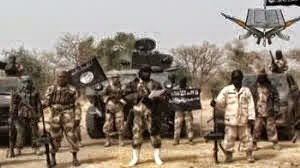 Reports coming in states that Boko Haram fighter have reportedly kidnapped hundreds of people including women and children across Northern Adamawa State. According to Daily Trust, Residents who got free and ran away said that the group kidnapped at least about 50 young women in Gulak town on saturday as the victims were assembled at a preaching ground. Boko haram has been controling the areas of Madagali, Gulak and Michika, damaging lives and properties in the area. One man known as Tija told reporters that he was trapped in a village near Gulak before his subsequent escape on Sunday. He said that the women were loaded on to several vans and then taken away. He said: “Some women brought the news that Boko Haram forcefully took some of them away including a sister in law to a friend of mine. The situation is getting worse by the day, our hope is that this problem will end one day”. A resident of Husra village in Michika Local Government Area, Musa Uba said : “They conducted preaching sessions to attract converts to their sect but people only listened out of fear. They next day they asked if anybody wanted to join them but there was no response, so they selected many healthy looking young men and asked them to go with them. One of the victims is my relative who did body building exercise regularly. A politician in the area named Maina Ularamu said: “the information I have is that they selected some women and locked them in the local government Secretariat”.