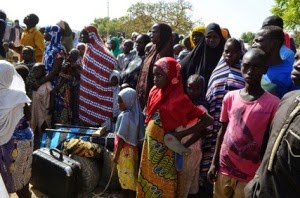 The unabated killings being perpetrated by the dreaded Boko Haram sect in northern Nigeria have forced many displaced persons from the affected communities to invade Lagos state, the commercial of the country, this is according to a report published by Punch online.                   According to the investigative report, many Northerners are now taking refuge in Lagos and other Nigerian cities as a result of the activities of members of the Islamist militants in their states.“The killings in our communities by Boko Haram members made most of us to run for our lives,’’ Awalu Bernard, a commercial motorcycle operator who hails from Adamawa, told Punch correspondents in Hausa language in Festac Town area of Lagos.When asked if he had lived in Lagos before, Awaju stated: ‘’This is my first visit to Lagos. I was a successful farmer before I found myself here. I am not the only one from my place, Madagali Local Government Area of Adamawa State who came to Lagos at the same time.“We were many. The killings in our communities by Boko Haram members made most of us to run for our lives. Some of us are staying with our relations while others are staying with friends who helped them to secure commercial motorcycles.“We are not happy that we are here but the situation turned us into what we have become. That is why there are so many commercial motorcycles in Festac. Some of us who could not afford the motorcycles, resorted to doing any menial job in sight.”He added: “I used to sell rice, flour and other food stuff. I had a big shop. In fact, in a day I could sell 20 bags of rice but because of the destruction in Adamawa, I had to run for my life.“I am not happy that I am riding a motorcycle which does not give me enough money as I used to have before. When I was at home, we could invest N50,000 or N100,000 into farming. But the insurgents have destroyed all our farmlands. We could not run to any Northern state because none of them is safe.”Another displaced person who simply identified himself as Bitrus James, also narrated how he was forced to flee his home town in northern part of Nigeria with only the cloth he wore, leaving his parents behind.He said: ‘’The situation is worrisome over there. It was so bad that I came to Lagos with only the cloth I had on me.“What is going on there is a real war. I don’t know the whereabouts of my parents. We have not spoken since I arrived. We are looking up to God to assist because it is totally bad over there.‘’Some of our people are also members of the sect. They pay them so much money to join. They pay as much as N200, 000.00 for people to join Boko Haram. The money is part of what attracts young people to the sect. Now that I am here, I don’t have plans of leaving Lagos until the condition gets better.”Investigation also showed that youths in their hundreds from North Eastern Nigeria where Boko Haram insurgency has become alarming, are trooping to Lagos on a daily basis.Aside being Okada riders, some others do menial jobs like water vending, cart pushing, shoe mending and security guards.It was further discovered that most of them have no decent place of abode in the city already overpopulated with about 17 million people.Some of them are said to be sleeping on the streets in the slums, while others occupy uncompleted buildings in their neighbourhood.You can read details on Vanguard.This is coming after the European Union (EU) revealed plans to give the sum of €5 million to boosts its humanitarian aid to the displaced victims of the Boko Haram insurgency in north-eastern part of Nigeria.The revelation was made known on Tuesday by Christos Stylianides, EU’s Commissioner for Humanitarian Aid and Crisis Management.