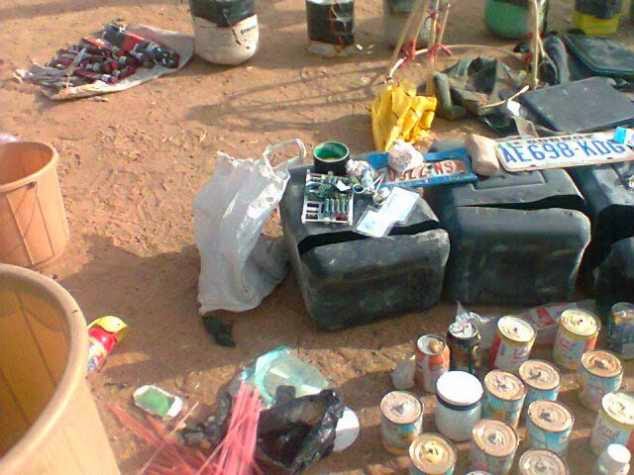 Boko Haram militants allegedly plot to launch the massive attack on Borno State capital Maiduguri during Sallah festival.
According to Sahara Reporters the Nigerian military learnt that the sect plan to carry out multiple explosions. To prevent the tragic development the military announced strict measures regrading the movement of vehicles in Borno.
Army’s 7th Division spokesman Colonel Sani Usman said in a statement that information“at the disposal of security agencies reveals that Boko Haram terrorists have perfected plans to launch multiple bomb explosions in Maiduguri metropolis and other major towns across Borno State during the Eid El Kabir celebrations 2014 using motor vehicles, tricycles, etc. Their main targets include Sallah praying grounds, markets and other public places.”
Vehicular movement will be banned in Borno from 5 p.m. today, October 3, to 7 a.m. on Monday, October 6.
Usman urged Nigerian Muslims to perform Eid El Kabir prayers at praying grounds close to their homes adding:
“While necessary security measures are being implemented, members of the general public are hereby requested to comply fully with this embargo as defaulters will be severely sanctioned.”
The spokesman stated however that workers of hospital and other essential services make an exemption from the order.
Nigerians were asked to remain vigilant and report any suspicious objects, movements and persons to the nearest security agencies.
It would be recalled that reports about possible attacks on Maiduguri first surfaced last month and were based on the gathered intelligence.
The information emerged as Boko Haram continued seizing news Nigerian towns and declaring caliphate in the captured territories.
Amid the fears that the state capital might be soon fall under control of the insurgents, soldiers soon started evacuating families from two major barracks.
However the Nigerian military have recently repelled several attacks on Konduga town, which was supposed to become a gateway for storming Maiduguri. In September 17 operation the the Nigerian defence claimed the army had killed the impersonator of Boko Haram leader Abubakar Shekau. Still, yesterday “Shekau” appeared in the new video saying he is still alive, but the DHQ called the information provided in the new video a manipulation.