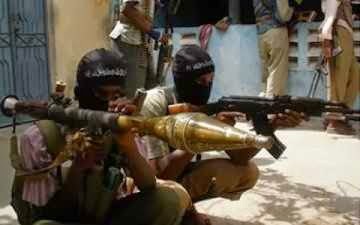 Members of the outlawed Boko Haram sect have, again, seized Chibok, the home of over 200 schoolgirls abducted by the insurgents in April.
The insurgents attacked and seized the town on Thursday evening, residents said.
The attackers have repeatedly targeted villages around Chibok over recent months.
A senator from Borno State, Ali Ndume, told theBBCHausa service that security forces deployed in the town ran away when the insurgents attacked.
Residents said the insurgents headed to the centre of Chibok and declared that they were taking it over as part of their caliphate.
The insurgents have changed tactics in recent months by holding on to territories rather than using hit-and-run attacks that have left thousands dead.
It was, however, learnt that the attackers were those dislodged from Mubi by soldiers on Thursday.
A security source said troops engaged the insurgents in a lengthy gun battle at the headquarters of the Chibok Local Government Area.
Our correspondent could not ascertain the casualty figure as of the time of filing this report.
The source said, “The Boko Haram fighters attacked Chibok again on Thursday night but the soldiers gave them a good fight.
“From what we heard, the insurgents were those dislodged from Mubi following attempt by soldiers and the vigilante members.
“You know that vigilante members were drawn from all the local government areas of Adamawa. Some also came from Gombe and Kano states.”
But another security source said the insurgents only attacked Chibok and left without occupying the place.
Our correspondent could not get the Defence Spokesman, Maj. Gen Chris Olukolade, to comment on the attack as the calls to his mobile telephone line indicated that it was either switched off or in an area outside of network coverage.
Chairman, Chibok Community in Abuja, Chief Tsambido Abana, who confirmed the Chibok attack on Friday, explained that the situation in the town was dicey and the condition of residents uncertain.
Abana said, “I have been getting information that Boko Haram has attacked Chibok town again. Those that were able to escape to a place where there are mobile networks phoned me that the militants were shooting at people and for now, we don’t know the number of those that have been killed.
“I also learnt that the Army and the vigilante group have responded to the attack and they are engaging the terrorists, but for now, the situation is not clear. I believe within a day or two, we would get a clear picture of the situation.”