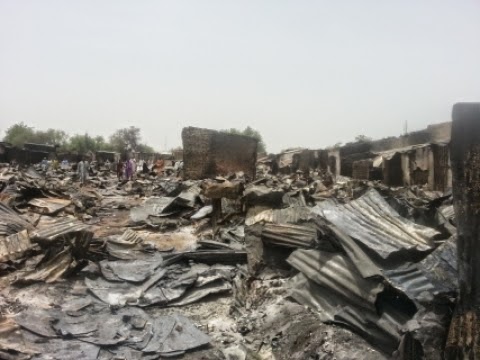 Armed Boko Haram terrorists yesterday attacked Kalabalge, a community in Borno where vigilantes had recently repelled an attack by members of the extremist Islamist sect – and left a horrific scene, with at least 40 dead people and widespread destruction.A security agent and a community source told SaharaReporters that more than 500 Boko Haram fighters arrived in the town in numerous pick-up vans and were able to overwhelm local hunters and vigilante members within the community. Continue…

Yesterday’s attack originated in Gamboru Ngala, a border town between Nigeria and Cameroon, and lasted for several hours. Our security agent source disclosed that the religious militants also attacked Ankulkule, Chekobe, Izge and five other communities. The source told SaharaReporters that some of the villages were completely burnt, adding that most of those who survived the horrendous attacks had fled to Cameroon to seek refuge.About a week ago, a group of local hunters and youth in Kalabalge had ambushed a contingent of Boko Haram terrorists who arrived in the village to wreak havoc. The vigilante group killed scores of the militants, arrested a few, and send others scurrying into the bush to escape.A member of the village told SaharaReporters that, having resisted and repelled Boko Haram, members of the community expected the Islamist group to launch a vengeful attack. “Our vigilantes were ready, waiting for them, day and night,” the source said. “We knew that soldiers cannot protect us, so our fighters were ready. But they came in such large number that we could not withstand them today.”Source: Sahara Reporters