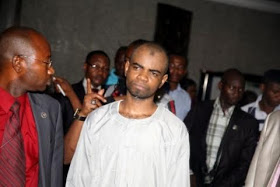 A member of  Boko Haram sect, Kabiru Sokoto, accused of facilitating bomb attacks on the police headquarters in Sokoto State and some other government organizations in the state between 2007 and 2012 was yesterday sentenced to life imprisonment by an Abuja based high court.
Presiding judge, Justice Adeniyi Ademola found Kabiru guilty of also having prior knowledge of the bomb attack at St. Theresa’s Catholic Church on December 25th 2011.‎