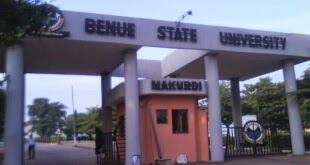 Lecturers of Benue State University under the umbrella of Academic Staff Union of Universities (ASUU), have today embarked on an indefinite strike after a lengthy meeting. Reports reaching Benue.com.ng revealed that the lecturers are aggrieved about the non-payment of salaries and have vowed to remain at home until they are paid.
This latest strike action adds the the number of Benue institutions closed as a result of wage related disputes as the colleges of education in the state have been on strike close to a year now. Likewise other higher institutions in the state.
It no news that the state government have been unable to meet up with workers wages owing some 4-5 months, including salaries of pensioners and student bursary.
UPDATE…
Disclosing this in a telephone chat with Peoples Daily yesterday, the Chairman of the Union, Dr. David Ikoni said the State government has failed to pay their February salary thus necessitating the strike action.
“We have downed tool and this is indefinite until the State pays our February salary. It does not matter how long it takes government to pay, we will not return to classes until we are paid”, he said angrily.
It could be recalled that two(2) years ago during the nationwide ASUU strike, Governor Suswam had threatened the lecturers with ‘no work, no pay’. But this threat turned against him as the lecturers also issued theirs of no pay, no work.
Governor Suswam has been grappling with nonpayment of teachers’, local government, pensioners as well as civil servants salaries for many months.
SOURCE: Benue.com