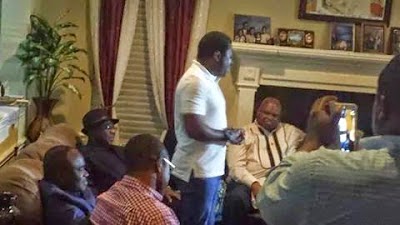 Governorship Candidate of the Peoples Democratic Party (PDP) in the rescheduled for April 11, 2015 elections in Benue State, Rt. Hon. Terhemen Tarzoor has canvassed a more robust engagement between the Benue Community in the Diaspora and the people and government of the state.
Such engagement he said was necessary for Benue to  move to greater heights as it marks its 40th anniversary next February.

In a press release signed by Dr Cletus Akwaya Director of Media and Publicity Tarzoor/Ngbede Campaign Organization(TARN)2015.Tarzoor spoke in far away United States of America at two  consultative meetings with a cross section of Benue citizens in US   in Atlanta, Georgia and Houston, Texas where he unveiled his “Strategic Intent”  for development of the state if elected governor.

On the visit with Tarzoor were Director-General of the Tarzoor/Ngbede Campaign Organization(TARN 2015), Ambassador Iyorwuese Hagher, Direcor of Media and Publicity, Dr Cletus Akwaya, Director General of NAFDAC, Dr. Paul Orhii, a former Member of the House of Assembly, Hon. Terkaa Mawoo and two former gubernatorial aspirants of the PDP, Ho. David Iorhemba and Dr James Mbachiantim.

As part of the envisaged collaboration with the Diaspora community, the Governorship candidate announced his intentions to open a Bureau for the Benue Diaspora Community in Makurdi, the state capital if elected Governor.
“This Office shall have departments for Education, Health, Justice, investment and commerce, Human Rights, Technology Transfer among others and will be staffed by your fellow Diaspora colleagues” he declared adding “we shall work with you to tap your rich experiences and expertise in various fields to develop our dear Benue state”
He said the office shall also coordinate all donor activities of the Benue Diaspora communities in America, Europe, Asia and other parts of the World and  ensure the transparent utilization of development funds attracted into the state by the Diasporans from international non-governmental organizations.

The Governorship candidates unveiled his development blueprint for the state saying his administration would focus on the core areas of Agriculture, Health, Education, Tourism, Pension Reforms adding youth empowerment programmes will also mounted to create jobs for the teeming unemployed youth.
“We want to make Agriculture our crude oil because we are richly endowed in this area. We shall establish cash cows in this sector by adding value to our agricultural produce through processing and appropriate marketing policies so that farmers can have the best value for their efforts” he stated.
He announced plans to establish a football academy, establish an entertainment complex to train the youth in music, movie industry and the arts adding vocational education will be accorded top priority as part of measures to create jobs  for the youths and generally stimulate economic activities.

“We shall also utilize our Traditional Institutions and engage them in the provision of dividends of democracy by coordinating rural  development projects in their  respective domains” he added.

In their separate responses, representatives of the Benue Community in Atlanta, Mr. Henry Mngerem, Dr Iye, Mr. Joseph Unongo and Mr Henry Amako, Mr.Tyowua Iorbo hailed the initiative of the Governorship candidate to embrace the Diaspora community in his strategic plans to develop the state if elected Governor.

The Community leaders announced their readiness  to partner with the guber candidate in his quest to govern the state and pledge their support towards the realization of his ambition.