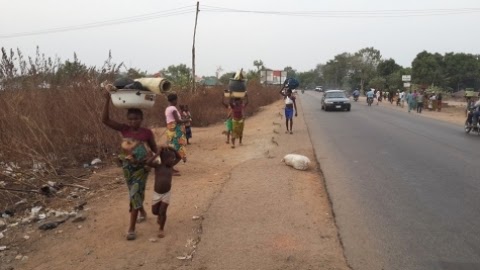 The Police Command of Benue State confirmed that two people were killed in renewed attacks by suspected Fulani herdsmen against Tiv farmers in three communities in Logo Local Government Area on April 11, 2014, Friday.
According to NAN, Tse Chembe, Ifer and Tse-Gundu communities, which are located along the Anyiin/Wukari road, near the hometown of Gov. Gabriel Suswam, were besieged.
The attack started in the early hours of Friday and lasted for several hours.
Eyewitnesses denied the official figure of causalities that equalled 2, claimed that the attack lasted for not less than 6 hours and left over 5 people dead.
The insurgents, who came in two groups and used different routes to invade the villages, killed and maimed, as well as looted the property of their victims.
It would be noted that the attacks on villages in Logo LGA came barely 10 days after a peace treaty brokered by the DIG (Operations) of the Nigeria Police Force, Mr Michael Zoukomo, between the leaders of Fulani herdsmen and Tiv/Agatu farmers.
Settlers in three affected areas have recently returned to their homes to cultivate their farm lands, following the agreement.
The GOC 82 Div, Maj.-Gen. Shehu Yusuf, has been redeployed to Benue to ensure timely resolution of the crisis.
(NAN)