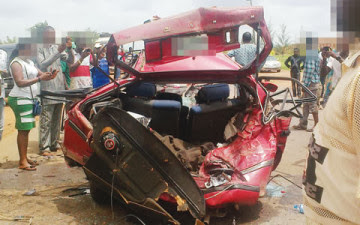 Tragedy struck again on Wednesday as two persons were killed while no fewer than nine others were injured after a tipper rammed into pedestrians at the U-turn end of the Lagos-Abeokuta Expressway.

“On their way back, while connecting the express, the convoy caused the accident. They drove into the expressway recklessly without stopping to check for oncoming vehicles.

“At the time they connected the expressway, a tipper was approaching on top speed. To avoid hitting the convoy, the tipper swerved to the right side of the road. It lost control and rammed into some pedestrians standing by the side of the road.”

The tipper was said to be avoiding a government convoy of 7 vehicles that allegedly drove recklessly into the busy expressway from a side road. The unfortunate incident accurred between 11am and 12pm.

Eyewitness told Punch that the convoy had stopped to visit a yet-to-be identified person admitted at a private hospital in the area. “It was a convoy of about seven vehicles. There were four jeeps and three escort vans. The escorts were riot policemen,” the source added.

11 persons were hit, while two died on the spot.

The source said, “The riot policemen came down, they watched the scene for a while, jumped into their vehicles and proceeded towards the Sango area of Ogun State. We could not challenge the convoy when it stopped because the policemen carried guns and they looked menacing.”

It was learnt that a Lagos State Ambulance Service bus later arrived to convey victims to the hospital.

Eyewitnesses were unsure if the convoy belonged to either the Lagos or Ogun state governments. One of them said, “The number plates of the vehicles were covered.”

The question is, which governor was in that convoy? Or is it one big man who is not even in government?