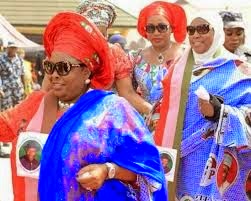 No fewer than 750 women from the All Progressives party from the 23 local governments in Sokoto State on Tuesdaydefected to the Peoples Democratic Party.The decampees, led by Luba Dubai, an APC chieftain, were received by the state Chairman’s wife, Sa’adiya Milgoma, at the PDP women rally in Sokoto on Tuesday.“The new entrants will be treated equally and fairly, and we should all work to ensure the success of the party at the forthcoming polls at all levels,’’ Ms. Milgoma said.A former Minister of Women Affairs, Maryam Chiroma, appealed to Nigerians, especially women not to be deceived, saying `”the re-election of Jonathan will ensure the continuation of his transformation agenda.Ms. Chiroma, who was also PDP’s former National Woman Leader, said, “the Nigerian women should use their majority population and voting power to re-elect Jonathan”.In her remark, Sarah Jubril, the Special Adviser to President Jonathan on Ethics, said the president had treated the North-West fairly and deserved to be re-elected.A member of the party’s Board of Trustees, Rabi Ibrahim, said “Jonathan is the first gender-friendly president Nigeria has ever had since independence”.“Mrs Jonathan cares about the Nigerian woman and she is passionate about improving the lives of the Nigerian children and other vulnerable groups,’’ Ibrahim said.The Special Assistant to Jonathan on Women Empowerment, Ramatu Bala, also urged the women to vote for Jonathan.Ms. Bala, a former National President of National Council for Women Society, said Mr. Jonathan’s re-election would ensure the sustenance of peace, unity and national cohesion.The wives of the Deputy Governor, PDP gubernatorial candidate and Woman Leader, Kulu Shagari, A’ishatu Wali and Kulu Rabah, promised that women would vote for the party’s candidates at all levels.Source: NAN