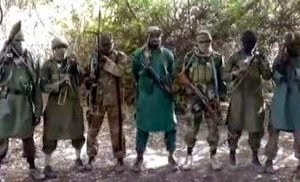 According to a report on Leadership, tension is high in Enugu State following the arrest of about 21 suspected Boko Haram members, who were reportedly traveling to Kaduna from Aba with several military uniforms concealed in a luxury bus. They were intercepted by the National Task Force (NATFORCE) at Amala in Udenu Local Government Area of Enugu State.

A source disclosed that the suspects were arrested early yesterday morning at Enugu border community that leads to the northern parts of the country. The Leadership correspondent who visited the Enugu State Police headquarters yesterday morning sighted the suspects coming out from the
intercepted bus with registration number, AKD816XG belonging to the Young Shall Grow Motors.

Reacting to the development, the Area commander of the Nigeria Police Area Command, Nsukka, Ros-Amson Musa Haladu (ACP), said full scale investigation would be carried out to uncover the true mission of the 21 suspects. The state commissioner of police Mohammed Adamu Abubakar, stated that he has ordered the task force team to transfer the suspects to the police headquarters in Enugu.