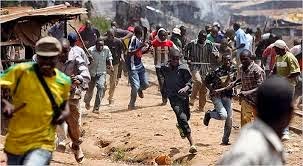 Cattle rustler this past weekend killed over 200 people who were attending a security meeting in Yargaladinma area of Dansadau community in Maru LGA of Zamfara state. The men said to have come in over a hundred motorbikes carrying guns and machetes, surrounded the building where the security meeting was holding and opened fire on them, killing over 100 on the spot. Some escaped, some died the next day while others were gravely injured.

The Emir of the Dansadau, Alhaji Husaini Adamu, while expressing his sadness over the attack said “This is not the first time the people of the area would be facing such problem but this attack was the worst of its kind in the history of killings in this area.”. Continue…
The Governor of Zamfara State yesterday visited the scene of the attack and was reported to have broke down in tears after seeing the corpses of those killed. He and his team later attended the funeral for 79, who were given mass burial.
In a related development, 18 APC Members were killed yesterday Sunday April 6th while on their way to attend their party’s stakeholder’s meeting in Maiduguri. The terrorist were said to have ambushed the men in Gwoza council area along the Maiduguri‑ Biu road, slaughtering them.