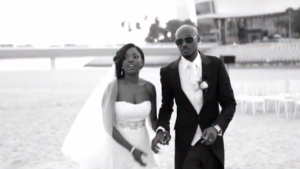 Nigerian music legend, 2face Idibia who was once seen as the most promiscuous Nigerian celebrity of all time now seems like the most loyal.

The multiple award winning singer has revealed that he never thought he could get married because he couldn’t see how he could be faithful in a marriage.
Speaking in an interview, he said, “I’m not surprised. Honestly, I mean back in the day it had come across my mind one or two times to propose to her but somehow it got to this point where I was like I’m not going to get married. Even before I started having kids I had already said I’m not going to get married.“
2face said he was scared of marriage because he thought he wouldn’t be a good husband.
“Before then there’s been one or two times where I almost proposed to Annie. But I just said no no no because I just thought I wasn’t going to be faithful, I wasn’t going to be good enough. I had always thought I wasn’t going to be the best man for any woman so because of that, I just thought I’m not going to get married; I’m just going to live my life” he said.
2face and Annie got married in Dubai on March 23, 2013 and have two daughters together. Yesterday, 2face Idibia revealed that he nearly died when he was 26.‎