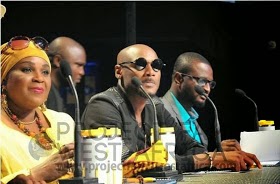 The music superstar, who was the guest judge at the MTN Project Fame West Africa nomination show over the weekend, watched a total of nine contestants perform some of his most popular songs on stage, seemingly impressed with what he saw the contestants do with his new and olds songs including ‘For Instance,’ ‘Ole,’ ‘African Queen’ and other classics before he went on stage himself to entertain the audience.

A highpoint of the event was when the contestants emulated some of the mannerisms usually attached to 2Face’s performances. Before taking the stage to perform songs off his latest album (“The Ascension”), the music maestro, 2Baba, encouraged the contestants while giving them “fatherly” advice