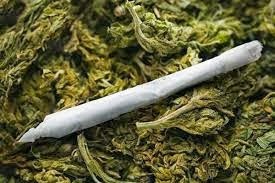 And the big Question is Why would a well thinking individual eat, drink, inhale or smoke any substance that is dangerous to health? That is the question that constantly assails the mind of many Nigerians even as they watch their kinsmen getting stoned on drugs, especially Indian hemp, on a daily basis.
Indian hemp bears different names in many cultures. It’s known as skales, sk, skunk, shiii, kpom, weed, pot, ganja, Mary Jane, grass, shunk, lala and igbo. Its origin can be traced to China in the 6000 BC where its seeds were used for food and medicine, among many others.
The drug, which has a scientific name, Cannabis sativa, has been used throughout history in many cultures to change mood, perception and consciousness – to get high.
A few years back, marijuana users are mostly street urchins, touts, thugs and the ne’er-do-wells. These days, however, the reverse is the case. Those who relish the Indian hemp include students and indeed, otherwise respectable professionals. Many University graduates indulge in the use of the drug as if they also earned a degree in hemp smoking And this includes the Benue youths. Statistics has it that 80% of the Benue youths now smoke SK
“Marijuana impinges on the central nervous system by attaching to the brain’s neurons and interfering with normal communication between the neurons. These nerves respond by altering their behaviour. For example, if the nerve is supposed to assist one in retrieving short-term memory, cannabiniods receptors make them do the opposite. So if someone has to remember what he did five minutes ago, after smoking a high dose of marijuana, he will have trouble remembering.”
further: “Marijuana plant contains 400 chemicals and 40 of them are cannabiniods which are psychoactive components that are produced inside the body after cannabis is metabolised. Cannabiniods is an active ingredient of marijuana. The most psychoactive cannabiniods chemical of marijuana that has the biggest impact on the brain is tetrahydrocannibol THC. Psychiatrists who treat schizophrenic patient advise them not to use this drug because it can trigger severe mental disturbances and cause a relapse.”
A chronic smoker of Indian hemp who boasted to have been in the game for 17 years said he isn’t considering quitting since it wasn’t dangerous to his health.
“I have been smoking weed since I was 18years old and now I’m 34. I do not intend to quit because I have not seen any damage it has caused me. I do very well in my work, I eat well and I’m a good father and husband. So what is this rubbish about marijuana affecting my brain?”
Another user, a student, admitted that the use of the drugs has started affecting his performance in school. “Sincerely, there have been times I vowed to stop but I still find myself going back to it,” he confessed.
“Most times, nemesis catches-up with the peddlers. One of their children ends up becoming addicted because of the destinies of the children they have destroyed will cry out for revenge. Such a case requires prayers and fasting,” he said.
Some of the mad people on the streets became insane as a result of marijuana use. It is a no go area for not only the youth but all humans.”
Daily, the number of smokers in Benue increases and if not controlled, we shall end up in a state of cloud9.. So quit smoking
Article Source: FRESHBAZE.COM 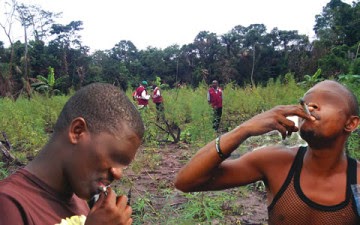